The Who's Who Of Brighton & Hove 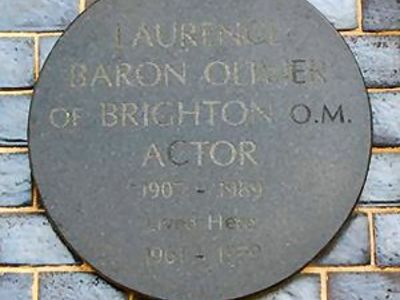 Brighton & Hove has many famous landmarks; the Brighton Pier, Royal Pavilion, the fashionable Lanes and of course the endless stretch of seafront.  What is less known is the celebrity status that the city holds.  It is not just a magnet for families, holidaymakers and London commuters; the eclectic mix of old and new, fashionable and traditional attracts many a famous face.  For hundreds of years, Brighton has been the destination of choice for those who want to be noticed.  So if you're planning a short break here  in a holiday let or even considering relocating, here are some of the faces you might just end up sitting next to the cafe.

With the miles of seafront, parks-a-plenty and the Downs only a ten-minute drive away, Brighton & Hove is a haven for athletes past and present; dodging the joggers along the promenade is a skill required by any Brightonian and the Brighton Marathon is now a permament yearly event.  We have a few impressive sports men and women linked with Brighton & Hove; it's almost enough to make you want to lay off the doughnuts and go for a good ten mile run along the seafront. I said almost.

Sally Gunnell, Olympic gold medal hurdler, has lived in Steyning, a little village outside Brighton for many years and is often seen supporting public events, being as active in the local community as she was on the track.  Another gold medal Olympian, Steve Ovett, hails from Brighton itself; a statue of him mid-run stands in front of Preston Park, itself a popular place for runners and cyclists.  I was at secondary school with four times World Champion swimmer Karen Pickering.

Chris Eubank, World Championship boxer, is a familiar sight on the streets of Brighton & Hove. He frequents town, often on either his Harley Davidson or his mahooooosive American truck (horn a-honkin') and is always immaculately turned out in his slightly eccentric clothes.  He once very nearly mowed me down on a motorised scooter in a Brighton twitten whilst wearing a kaftan.  Yep, he's noticeable!  Although most know him as Chris Eubank, he purchased the title 'Lordship of the Manor or Brighton' at auction.  He's also a bit of a local hero due to the fact he built sixty-nine flats for the local homeless, costing him £1.25 million of his own money.  A bit of a champ out of the ring as well as in!

Robin Cousins, Olympic gold skater and probably just as famous for his role as judge on 'Dancing On Ice' for ITV, has lived in Brighton for many years and is a familiar sight out and about.  Nicky Slater, championship skater and also a judge on 'Dancing On Ice' lived in Brighton until 2011 and came to me for singing lessons (my other job!) for years; he's a lovely chap.

Oooh we all love a bit of drama! I have to say that I've not seen many explosive incidents on the streets of Brighton & Hove, which is a good thing, but we do have a few actors providing the excitement in various soap operas, past and present.  One of the most familar faces is that of bad, bad, bad man Richard Hillman from Corrie (aka actor Brian Capron), who lives in Brighton.  He's apparently very pleasant indeed!

Equally familiar is Patsy Palmer (guess the soap; 'Rickaaaaaaaaayyyy!'), who until very recently lived in Brighton for many years. I think we Brightonians are a bit uncool as many of my friends have shouted 'Rickaaaaaaayyy!' at her when passing her in the street.  She's always brilliantly good-humoured about it, considering it must drive her mad after the gazillionth time.  I didn't shout it at her because I am cool.

It's not all frothy soaps, you know.  We have our share of stage and screen actors who frequently tread both the boards and the red carpets of film premieres.  Lord Laurence Olivier lived at 4 Royal Crescent for many years until the 1970's (there is a blue plaque now gracing his sea-facing home).  He was a commuter to London's theatreland and in 1972 he fought a lengthy battle to save the availability of kippers for breakfast on the morning train - and won, much to the delight of his fellow kipper-loving travellers.

Simon Callow rents out an apartment overlooking the now dilapidated West Pier when he is writing as he finds the view of the sea contemplative and enjoys the 'quiet' - I would question that somewhat, given the racket the seagulls can make of a morning.  The view of the sea seems to appeal to many actors; Cate Blanchett moved from London to Lewes Crescent in Brighton, saying '"We're moving out of London for good. I suppose it's just the draw of the ocean for me" (I believe she's moved back there now, however!).  When her £3.1 million house came on the market, I don't think there was a Brightonian who didn't want to have a look around it (the street had to be shut off in order to get her huge stone bathtub crane-lifted into the bathroom).  Other actors who currently live here include Steve Coogan (whereas Patsy Palmer gets 'Rickaaaaaaay!' screamed at her, Steve gets 'AHA!'), Amanda Redman, Tom Bell, Dora Bryan and Joe or Paul McGann - I honestly never can tell the difference between them!

You can't get away from music in Brighton; it's everywhere.  You'll see so many buskers, street entertainment, open mic nights in the local pubs, gigs showcasing our unsigned bands and music competitions that you might just get inspired to dig out that dusty guitar sitting in the loft.  Rizzle Kicks come from Brighton!  Yes indeedy!  There are plenty of music studios here, one of the most well-known belonging to Brighton group The Levellers, who own a practice/recording studio in Kemptown.  Fatboy Slim (aka Norman Cook) lives on Hove seafront with his radio and television presenter wife, Zoe Ball.  I ended up working out next to Zoe several times at the gym; each time she kept offering me Polo mints.  Norman has hosted two rather large and rather noisy gigs on Brighton beach in the Summer months over the years and we are expecting another in 2015.  A regular and familiar face up until a couple of years ago was that of lead singer of Dexys Midnight Runners (Come On Eileen, Geno...you know the ones!), Kevin Rowland.  Kevin lived in Sussex Square in Kemptown and was seen most days in Kensington Gardens, one of his favourite areas; he's another head-turner with his razor-sharp suits and hats! Nick Cave (the Dark One), lives in Hove and famously crashed his car into a speed camera here in 2010; "I became a local hero, I took out the camera along the sea front with my Jag. I was the toast of Brighton for about five days. Little goths came and prayed at the scene and wrote, 'Nick Cave was here', he said of the incident. The Levellers are a bit of a Brighton institution, having met in Brighton pub The Eagle in 1988. Having been a student in the early '90s, the memory of 'One Way' being frequently sung in clubs/pubs/student parties always made me feel a slight pride that it has been penned in my hometown. Springing into a totally different music genre, Dusty Springfield lived in Wilbury Road, Hove, with her brother.  They formed the band 'The Springfields' before she was catapulted into mega-stardom as a solo singer.  Another successful female soloist (and one of my personal faves), Alison Moyet, moved to Brighton in April.  A must for an autograph if I ever see her.  Further down on my autograph list is former Dollar frontman, David Van Day (sorry David).  He ran a burger van here for some years in Churchill Square.  I never bought one.

Ouch.  But I really don't know how to categorise this list.  Here are some more famous Brighton & Hove faces;
Jordan (NOT ME) aka Katie Price - famous for being a topless model first and writer of books/maker of perfumes/face of reality shows second.
Chantelle Houghton - won celebrity Big Brother (only she wasn't a celebrity when she went in the house) and married lead singer of The Ordinairy Boys, Samuel Preston which only lasted a year.
Heather Mills - ex-wife of Sir Paul McCartney and charity fundraiser - lives on Hove seafront.
Peter Andre - famous as a singer but then became MORE famous for being the husband of Jordan (NOT ME) aka Katie Price.  He actually seems like a thoroughly nice chap and has recently opened a coffee shop in Hove.  I'd buy a coffee from him.

The Beckhams - apparently buying a house in Hove.

So that's a few of our resident look-twice faces.  There are loads more but we'd be here till Christmas if I wrote about them all.  Tell you what, come down for the weekend, set yourself up in one of the cafes in the Laines with your camera and become a Pap for the day.  Then you can add whoever you see to this list.

By Jordan Adams (soon to be famous).