Everything You Didn’t Know About The History Of Brighton 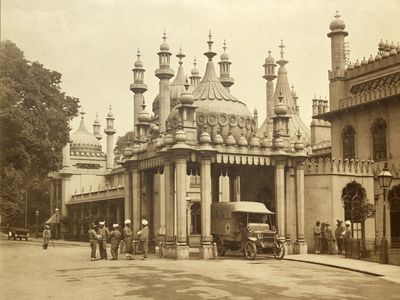 Brighton is an eclectic city and famous across the globe for its beaches, piers, and vibrant LGBTQ+ community. A quick stroll through Brighton will reveal history, culture, sub-cultures and a lot of pubs. However, there is far more to Brighton than Pavilions, piers and promenades. Here are ten fun historical facts that you probably didn’t know.

There’s no need to bless me. ‘Bristelmestune’ may sound like someone has sneezed while trying to say ‘Brighton,’ however Bristelmestune is the ancient name for Brighton, recorded in the Domesday Book, when it was just a small fishing village. As the village evolved into a city, the name became more pronounceable: Brichtelmeston, Brighthelmeston, and finally Brighton in the 19th century.

Brighton claims to have the longest running public electricity supply in the world. The permanent supply was started in 1882, but unlike many of its contemporary supplies, Brighton’s wasn’t shut down soon after, instead, it just kept going.

You could say that Brighton was quite the pioneer of all things electric. The world’s oldest operating electric railway, the Volks Railway was established in 1883 and will still take you up and down the seafront today.

On 4th July 1911, Horatio Barber took to the air in his Valkyrie monoplane from Shoreham airport. On behalf of the General Electric Company, he transported a box of Osram electric lamps, touching down on Hove Lawns, and in doing so, completing the very first cargo flight.

Throughout Brighton you will find art in surprising places, but few pieces as heartwarming as the Patcham Pilons. The stones were commissioned by Sir Herbert Carden and unveiled on 30th May 1928, to mark the extension of the boundaries of Brighton. You can see them clearly when you drive along the A23. As you drive into Brighton the inscription on the stone reads:

“Hail, guest, we ask not what thou art;

If friend, be welcome hand and heart;

If stranger, such no longer be;

If foe, our love shall conquer thee.”

Brighton was the first city in the UK to open an official naturist beach in 1979. Although rumour has it that Brighton’s residents were happily de-clothing in the area long before then.

The Pavilion was saved by Hitler

Yes, that’s right. German fighters during World War II were specifically instructed not to damage Brighton Pavilion, as Hitler quite fancied it as his seaside home, once the war was over.

Devil’s Dyke, an impressive glacial valley is now a rural idyll, owned by the National Trust, where Brightonians go to escape the city. However, in the 1800s, there were railways going up and down the valley, a cable railway, fairgrounds, bandstands and an observatory. Visitors would flock to enjoy all the fun of the fair and the entertainment on offer. An estimated 30,000 people visited Devil’s Dyke on Whit Monday, 1893.

Whenever you have a bad day, all you have to do is to think of poor Henry Phillips, whose pet project went so wrong he went blind from the shock. Brighton is not unfamiliar with bold and ambitious projects, just look at The Pavilion, or the i360. However, a 1.5 acre conservatory in the middle of Hove, was just a bit too ambitious.

Phillips was a keen botanist and dreamt of a tropical paradise in the middle of Hove. Together with architect Amon Henry Wilds, they commenced their ill-fated build in 1832. It went very well, with the largest glass dome in the world, brick plinths, cast iron girders and a total of around 3700m2 of glass.

No one quite knows why things went wrong, but it is known that there were arguments between the architect, the project managers, the building contractor and Phillips. On 29th August 1833, 2 days before the grand opening, there was still scaffolding holding up the magnificent and beautiful structure.

However, on this day, English, the building contractor, took the decision to remove all the scaffolding, to prove the quality of his work. On 30th August, 1 day before the grand opening, not long after all the scaffolding was down, a couple of large cracks were heard. The builders ran for their lives and 500 tons of building material came crashing to the ground.

English and the building team fled the country and the mess proved to be such a popular tourist attraction that it wasn’t cleared up for 20 years.